A Ghost In Every Bar
the lyrics of fran landesman 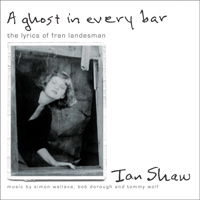 In spring 2011, as part of the Art of Song Season, a special concert was presented in honour of Fran Landesman's prolific poetic and lyrical output. Shaw was the natural voice that evening to sing Landesman's biggest hit, the singer's song of Beatnik frustration, Spring Can Really Hang You Up The Most.

Artists as diverse as Ella Fitzgerald, Mark Murphy, Chaka Khan and Rickie Lee Jones have visited this seminal classic. However, at the end of her life, Landesman cited Shaw's reading as her favourite, saying, "Frankly I was tired of hearing Spring until I heard Ian Shaw sing it."

It seems only natural, therefore, that this country's finest male jazz singer and avid story-teller should record an anthology of Landesman's work.

A Ghost In Every Bar (Splash Point Records), includes two classic tracks from the collaboration of Landesman and Tommy Wolf, the already-mentioned Spring Can Really Hang You Up The Most and the moving Ballad Of The Sad Young Men, the latter track enhanced by the flugelhorn of Sue Richardson.

Apart from Small Day Tomorrow, which was written by Landesman in collaboration with Bob Dorough, all the remaining tracks are from the enduring partnership of Landesman and pianist-composer Simon Wallace. Four of these have never been recorded for release before (Stranger, Killing Time, Noir and Nothing Lasts Forever).

A Ghost In Every Bar returns to the atmosphere of Shaw's first recording for Splash Point, his piano and voice solo album, Somewhere Towards Love. This time, the piano duties are shared (a coup indeed!) with the composer of the lion's share of Landesman's collaborative work, Simon Wallace. Recorded "live" in the studio, the album captures the immediacy, intimacy, darkly comic twists and skewers of Landesman's world, as well as Wallace's hauntingly-beautiful settings.

The album was engineered and produced by Neal Richardson.

A Ghost In Every Bar